Diary of a *New* Dad 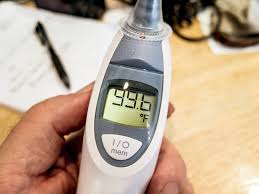 VAB is a Swedish term which means Vård Av Barn (taking care of sick child). To VAB is when a working parent stays home from work in order to take care of a sick child. Fortunately, parents in Sweden are allowed to take time off to be home with their child if she falls sick, and during this time off, the Swedish social security system pays the parent a major chunk of their lost pay for every day that they spend home “VAB:ing”.

In Sweden, February is a month when the flu viruses (and other similar infections) wake up from their not-so-long sleep to infect every single school going child, their parents and, if the parents are not careful enough, their colleagues at work as well. This flu take at least a week to pass over and maybe another week or so to come back for another round. Thus, most of february is spent under the shadow of VAB and so, as a joke, the month is also called VABruari.

I didn’t really know this term at all the first few years of our life in Sweden, but the moment our daughter was born, we were familiarized with it. And when she started going to her pre-school (Förskola in Swedish), we really started to feel the full impact of it.

In our case, the events have been pretty straightforward and without any deviation since the beginning. Nitara goes to her pre-school. Nitara sneezes. Parents get worried, Papa more so than Mamma. Nitara slowly develops cold , a running nose and fever, and stays home from förskola. 48 hours in, Papa also catches flu which further deteriorates into Man-Flu and he crashes into bed. Papa and Nitara are both home for a few days taking care of each other while Mamma goes to work. One week later, Nitara is finally fit to go to förskola again. Papa is still recovering slowly from flu and swears that this time the strain was much stronger than before. Papa goes back to work, the cough and blocked nose improving vastly better each day. Papa is finally free from the flu and decides its time to have an ice-cream tonight. Meanwhile, in the other room the parents hear Nitara sneeze. Parents get worried. Papa more so.

What is your experience of VABruari? Do let us know by commenting on this post.